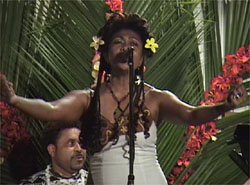 Laisa Vulakoro, the Vude Queen, is one of the most popular singers of all time in Fiji. Vude, pronounced "vu-n-day" is the music beat that is unique to Fiji — a combination of disco, rock, country and island style. The beat derives from the traditional meke or dance sound.

Laisa has been singing for almost 20 years, and with 16 published albums to her name has written and arranged most of her songs. Born on the remote island of Yacata in Fiji with a population of only 150 and no running water or electricity, she is the youngest girl of a family of eight girls and six boys.

Her late father, Delai, was a choir-master and lay preacher of their church. Everyone in the family sang in the church. Her late father and a few of her brothers are also song-writers. Her band in Fiji includes mainly family members.

Laisa is currently a director of the Fiji Performing Rights Association, which is a non-profit organization that protects the rights of composers in Fiji. She has toured most of the Pacific Islands, including Papua New Guinea, Vanuatu, New Caledonia, Cook Islands, Marshall Islands, Hawaii and the Solomon Islands. She has also toured North America, Australia and New Zealand and London. She has performed in most of the top Resorts in Fiji and for many years was the resident singer at the Regent of Fiji and the Sheraton Fiji Resort.

Laisa is a charity worker who has donated her time and talent toward helping underprivileged women and children and is a champion for young talent, especially with the Blind School, Hilton Special School and various orphanages around Fiji.

In recognition of her tireless contribution to charity, she was awarded a Fiji Independence Medal in 1996, given only to outstanding Fiji citizens, and in 2003 the French government awarded her the title of "Chevallier of Fine Art and Literature."

Laisa was named by a well known columnist in Fiji as "Fiji's Living National Treasure" in recognition of her ability to bring people from all races and diverse backgrounds together through her music.

Her versatility and talent enable her to sing many styles of music, and her stage presence makes her the complete entertainer.